In this exercise you will observe the fate of fertiliser nitrogen in a fallow situation: Urea to ammonium to nitrate and the loss of soil nitrate via denitrification.

This simulation will introduce us to editing a simple Manager rule and to more advanced features of graphing simulation results. Firstly we need to set up our weather and soil data. The simulation is on silt soil in the Bhola region in Southern Bangladesh. 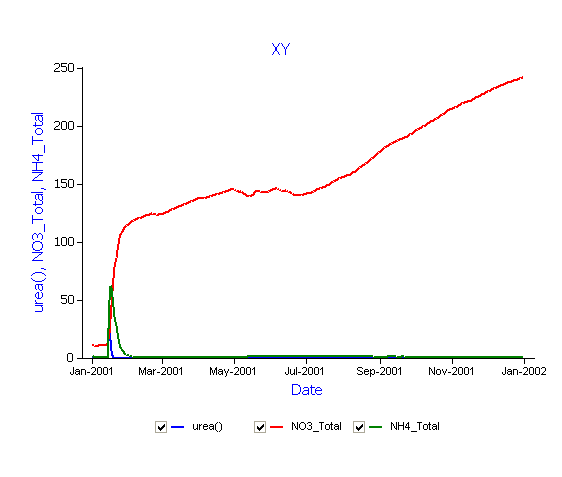 Question: Why does the above graph look the way it does?

Illustrating the extent and conditions required for denitrification losses 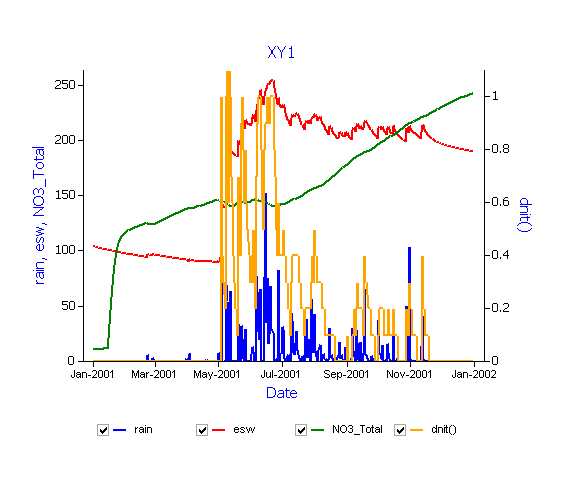 From this chart you can see that some nitrogen is lost via denitrification when large amounts of nitrate is available in saturated soil conditions. But why do you think the level of denitrification is so low (0.1 kgN/ha/day) in this case?

Exploring vertical movement of nitrate, after fertilisation, through the soil profile

Let’s look at the distribution of nitrate through the soil profile at the day fertiliser is applied and then at 1, 3 and 5 months after fertilisation.

In this exercise we track the movement of nitrogen in fresh organic matter into soil microbial biomass and further into mineral nitrogen. We shall compare the flows in these processes for incorporation of two types of residues – wheat and cowpea.

Inspect the change in fresh organic N in residues (fom_n) with time.

Note: There is a steep increase in the first few days when tillage incorporates the surface residues and this material is passed onto the soilN modules as FOM. Soil “fom_n” for legume is higher than for wheat residues reflecting the differences in N content of the 2 materials as determined by the C:N ratios input to the model.

Differences between wheat and legume dynamics in decomposition of FOM and its N content can be seen in the transfer of N into the microbial N pool (biom_n_tot), and the effects of this transfer on the net immobilisation/mineralisation of organic N from/to the soil nitrate pool. NO3 levels increase over time reflecting changes in fom_n and biom_n pools.

Question: Would these rates of change increase during the wetter and warmer months?