AgPasture is a pasture growth model developed and integrated in APSIM. It is largely based on the physiological model of Thornley & Johnston (2000) as implemented in SGS/DairyMod/EcoMod (Johnson et al. 2008), but some changes have been incorporated in describing plant growth in relation with environmental factors, and in model structures for plug-in the APSIM system. Also, a set of management tools has been developed for modelling pasture management such as grazing, cutting and renewal.

AgPasture is primarily designed for the simulation of mixed pastures of C3 and C4 grasses and legumes. The default module has been parameterised for any combination of perennial ryegrass, white clover and paspalum.

Setting up a simulation

The easiest way to set up a pasture simulation is to open the example simulation (agpasture.apsim), and save it as new simulation and modify it according to the pasture to be simulated.

Same as with other crop models in APSIM, simulation of a pasture paddock needs to include a minimum set of other modules in APSIM system in addition to AgPasture. These include Micromet, Soil (SoilN and SoilWat or SWIM), Surface Organic Matter (SurfaceOM) and Fertiliser, and optionally Irrigation and pasture Managers (e.g., “Regular harvest or grazing with return” in Fig 1). AgPasture relies on Micromet to calculate solar radiation interception and water demand of pasture plants, and uses Fertiliser to return animal urine to soil profile.

The AgPasture component is listed under the ‘Crop’ folder in the ‘Standard’ tool box. The default AgPasture is an established pasture of perennial ryegrass and white clover, with initial pasture status (See AgPasture GUI in Fig 2). The parameters include pasture species, and their initial shoot mass and litter mass (kg DM/ha). The parameter values are specified by species in different columns and can be adjusted by users. Also, plant root depth and the assumed distribution profile of relative root mass in soil profiles (with maximum = 1) can be specified. The root distribution profile should have the same number of layers as that described in the soil module, but a minimum number of layers will be used in calculation when they are not the same. The last parameter specifies if the plant water uptake is calculated by the AgPasture module itself (default as ‘calc’) or by another module in APSIM.

After dragging an AgPasture component into a paddock, users may specify the initial state. Users may also cultivate the soil and sow pasture using the ‘Sow pasture’ Manager described below.

The Manager module of APSIM provides a flexible approach to allow the user to set up pasture management practices or rules. A set of Managers have been setup to go with the AgPasture module with GUI for convenience, which is in the Standard toolbox, under ‘Management\AgPasture management’ folder. These include:

Regular cut and remove (with no return) (Fig 3) 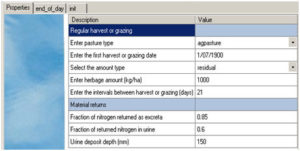 It shows that the pasture is not harvested before 1/07/1995, the harvest frequency is once every 21 days and the harvest residual is 1000 kg DM/ha. 85% of grazed/harvested nitrogen is returned to soil, of which 60% is in urine and returned to the soil profile to a depth of 150 mm. The return of animal ingested nitrogen depends on animal type, age and health conditions, as well as management. Default nitrogen removal is 15% for sheep & beef, and 25% for dairy grazed pastures but it remains the user’s choice to set a sensible value for their system.

Cut and remove on fixed dates (no return) (Fig 5)

It shows the two harvests at specified dates, with a residual of 1000 kg DM/ha left after each harvest. The user may right-click on the panel to change it into ‘ Mode’, and add more dates on the ‘Properties’ tab, and open the ‘end_of_day’ to copy and paste the script for the added dates, for setting up the harvests on multiple dates.

Fig 7 Specification for sowing a pasture

The default initial state of AgPasture is established perennial pasture as described above. If an user wants to establish a pasture from sowing, the manager described above (Fig 7) could be used.

Fig 8 Specification for ending a pasture

This manager simply terminates he pasture, making the paddock available for other uses.

Model structure and scientific base

AgPasture is largely based on the physiological model of Thornley and Johnson (2000) as implemented in SGS/DairyMod/EcoMod (Johnson et al. 2008). Most of the processes and functions in plant growth have been described in these publications and in documents of Johnson (2008). Here we briefly describe the module structure and the daily pasture growth process in relation with other modules in the APSIM system. Emphasis is on the structures, processes and functions that are different from the previous model descriptions.

AgPasture is majorly a temperate pasture model of ryegrass-clover type, but C4 species can be added. Plant growth processes include photosynthesis and respiration followed by tissue turnover and senescence. Effects of water and nitrogen stress are incorporated. All the plant functions and processes, such as carbon assimilation, tissue turnover, water and nitrogen uptake, are modeled at a species level. The species compete for resources (e.g., solar radiation, soil moisture and nitrogen) and simulated species properties are aggregated into that of the pasture module (Fig 9) 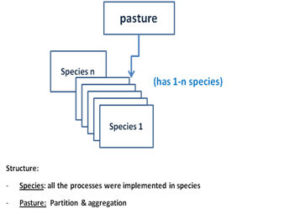 Fig 9 Pasture module consisting of one to many species. Plant processes are implemented at species level, while pasture (community) is responsible for resources partitioning among species and aggregating of species properties into that of pasture swards.

APSIM is a daily time-step simulation system. The program flow of AgPasture in APSIM during a one day time-step are as follows. The underlined words or terms are other APSIM modules related or used in the process. Those modules are documented separately.

(4) Pasture N demand and soil N supply: Plant N demand is calculated according to maximum and optimum N concentration of potential new growth tissues, plant N status and N remobilisation. Soil N supply is the mineral N in the root zone of soil profile (SoilN). Nitrogen limitation occurs when plant available N is less than demand, and a N limiting factor (GLFn) for pasture growth is defined as the ratio of plant available N to plant N demand. However, before partitioning plant available N among species, the N-fixation of legume species is calculated. The fraction of actual N fixation of legume species against its total N demand under N stress (GLFn) is calculated as:

where Fmax and Fmin are the fractions of N-fixation in total N-demand when soil N is unavailable and sufficient. Plant available N in soil layers is partitioned among species relative to their demands, and GLFn of each species are updated separately as the ratio of actual plant N uptake to demand.

where N, Nopt and Nmin are actual, optimum and minimum N concentration of plant leaf tissue. So plant new growth incorporating N concentration and water-deficit effects, but not N shortage for the daily uptake, is calculated as:

Then the effects of soil mineral N shortage against plant daily demand is added by multiplying the square root of GLFn.

(6) Partitioning of plant new growth Plant new growth is partitioned to plant shoots and roots using a dynamic partitioning coefficient towards a target root/shoot ratio as described in Johnson (2008). A variable target root/shoot ratio is used for partitioning more assimilates to shoots in spring (roughly corresponding to reproductive stages) and less in autumn, as experimentally evidenced by (Parsons and Robson 1981). The assimilates partitioned to shoots are partitioned again among stem (+sheat), stolon and leaf.

This work was funded under the Foundation for Research Science and Technology of New Zealand as a part of “Rural Futures” programme (C10X0809) with assistance from the WFSAT.

Parsons AJ, Robson MJ (1981) Seasonal changes in the physiology of S24 perennial ryegrass (Lolium perenne L.) 3 Partition of assimilates between root and shoot during the transition from vegetative to reprodcutive growth. Annals of Botany 48, 733-744.