The first article develops a new gridded crop modelling framework for simulating maize yield, economically optimum N rate (EONR), and N leaching responses to increasing N fertilizer rates (0 – 320 kg N/ha) over 4270 fields in the state of Illinois (U.S.). The calibration and validation use a novel approach, where data from more than four hundred trials were gathered and the population of real responses was compared with the population of simulated responses across the main response variables (EONR distribution and average yield response to N. Additionally, simulated N leaching at the field-level was compared with N flows in the Mississippi river to validate the capacity of APSIM to represent N leaching patterns in the area. The dataset can have an important role for research and education in N management, machine leaching, and environmental policy analysis to achieve the goal of maximizing farm profits while reducing N leaching losses and negative impacts on freshwater ecosystems. 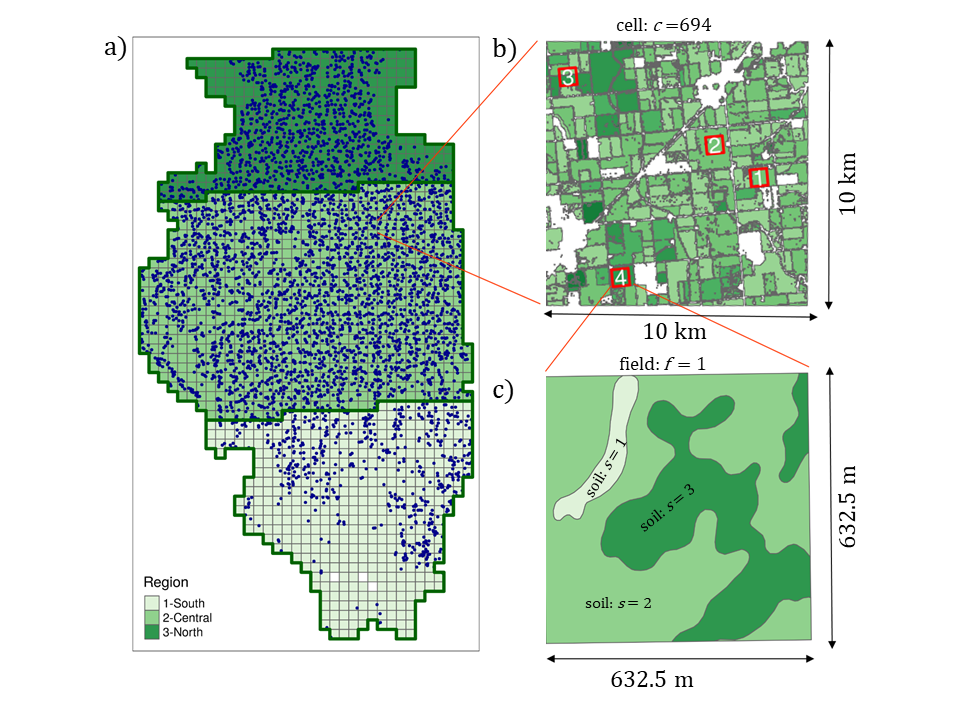 a) Map of Illinois, showing the grid of cells, the three regions, and the 4270 fields where soil and crop N cycling dynamics were simulated (blue dots). b) Example of one cell with four fields randomly placed in the target area. c) Example of multiple soil series occurring within one of those fields

The article describing the methodology is available here, the dataset together with an example code for one possible use of the data is here.

The second article uses the relationships between profitability and N leaching losses from the first article to investigate differences between static and dynamic nitrogen recommendation tools, with a particular interest in answering why dynamic tools struggle to increase profits over simpler static tools. Results show the profits curve is asymmetric, with larger economic losses when N rate is sub-predicted than when it is overpredicted. Dynamic tools try to predict the EONR for each field x year conditions, and in that attempt they overpredict around 50% of the time, experiencing high losses in those situations. Static tools tend to maximize profits in the long term, disregarding field x year variability. As a result, they recommend slightly higher N rates and underpredict less often. Thus even though dynamic tools are more accurate, they fail to increase profits over simpler static tools that recommend constant N rates and avoid that higher penalty experienced when N rates are sub-predicted. From an environmental point of view, we found that the higher accuracy of dynamic tools translates into a 5% lower N leaching than static tools. Nevertheless, we also found that static tools can recommend N rates that are slightly lower than the profit-maximizing N rate ($1 below) and also achieve a 5% reduction without reducing profits significantly. Overall, we conclude that there are opportunities for both tools to collaborate in achieving environmental goals. The full paper can be accessed here.